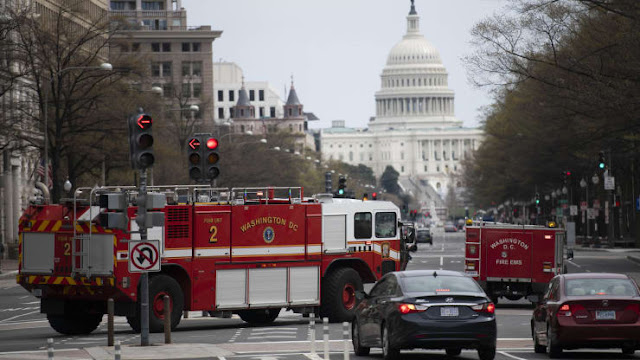 As Congress moves to pass its latest $484 billion coronavirus relief bill this week, leaders have started to detail their goals for additional legislation as part of an unprecedented emergency response.

The measure approved by the Senate on Tuesday puts about another $370 billion into aid for small businesses damaged by the pandemic, along with $75 billion in relief for hospitals and $25 billion to expand testing. The House plans to pass the package and send it to President Donald Trump’s desk by Thursday.

Even as the U.S. spends nearly $3 trillion to try to curb the outbreak’s economic destruction, congressional Democrats and the White House are spelling out priorities for further rescue measures. Republicans on Capitol Hill, meanwhile, are becoming wary of adding to the mounting coronavirus bill — setting up another possible partisan clash over priorities and spending as the pandemic evolves.

“There will be a big, broad, bold [fourth relief bill]. For anyone who thinks this is the last train out of the station, that is not close to the case,” Senate Minority Leader Chuck Schumer said at a news conference Tuesday with his fellow Democratic leader House Speaker Nancy Pelosi after the Senate passed the $484 billion legislation.

Schumer detailed a list of priorities that he said he and Pelosi share: vote-by-mail, funding for the U.S. Postal Service, hazard pay for Americans who still have to go into their workplaces, and additional money for state and local governments overburdened by their pandemic responses. Democrats blocked an initial plan to inject more money into small business loans earlier this month as they pushed for more funding for states and municipalities — which was not included in the Senate-passed bill.

In a pair of tweets Tuesday, Trump called to pass more money for state and local governments stretched to their limits. He pushed for an infrastructure package, complete with money for roads, bridges, airports and rural broadband — which Democrats support. The president also called for tax incentives for sports and entertainment businesses, along with a payroll tax cut.

“After I sign this Bill, we will begin discussions on the next Legislative Initiative with fiscal relief … to State/Local Governments for lost revenues from COVID 19, much needed Infrastructure Investments for Bridges, Tunnels, Broadband, Tax Incentives for Restaurants, Entertainment, Sports, and Payroll Tax Cuts to increase Economic Growth,” Trump wrote. 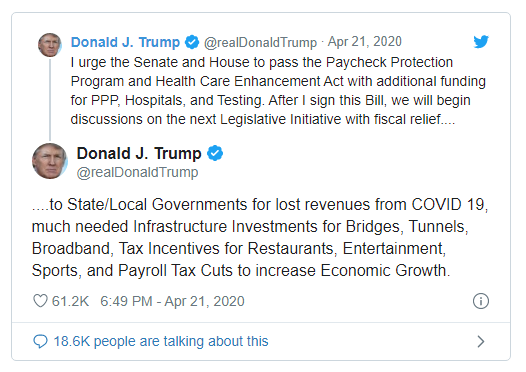 Treasury Secretary Steven Mnuchin reiterated those goals during a White House news conference on Tuesday — though it is unclear if Democrats would back the tax changes.

But hesitation from Republican lawmakers to add to historic emergency spending could trip up any ambitions Democrats and the White House have. After the Senate passed the bill Tuesday by unanimous consent with only a few lawmakers present, Majority Leader Mitch McConnell cast doubts about moving quickly on another relief package.

“But my view is we’ve gone so far on the national debt here that the next time we address this issue, the Senate should be back in session,” the Kentucky Republican said. “Fully up and running with everybody involved in discussion. So I will predict that we will not try to pass another rescue package by consent. My view is we ought to bring everybody back, have full participation to begin to think about the implications to the country’s future for this level of national debt.”

The full Senate is expected to return to Washington on May 4.

Speaking to radio host Hugh Hewitt on Wednesday morning, McConnell said he does not back using more federal money to buoy state governments. He indicated he would support allowing states to declare bankruptcy.

“My guess is their first choice would be for the federal government to borrow money from future generations to send it down to them now so they don’t have to do that. That’s not something I’m going to be in favor of,” McConnell said.

Neither Trump nor Republican lawmakers support vote-by-mail, a Democratic priority to make casting ballots safer during the pandemic. The president has said publicly that expanding mail-in voting would hurt Republicans in elections. It is unclear if changing the process would actually hurt GOP candidates, who have gotten elected for years in the handful of states that vote primarily by mail such as California.

The coronavirus has infected more than 825,000 people in the U.S. and killed at least 45,000 Americans, according to data compiled by Johns Hopkins University. Efforts to stop Covid-19′s spread have wrecked the economy, as more than 22 million people filed claims for unemployment insurance over the latest four-week period.

Back to Top
Close